My deployment by CartONG to work with the UN Joint Logistics Centre emergency flood response mission started on the 22nd October 2007. I was to work alongside another UNJLC GIS Officer, Bernard Chedid, who is based in Juba, South Sudan. We were to replace the previous GIS data officer who had already designed and implemented the mapping products.

After a handover from my predecessor, and the collection of equipment, I travelled to Soroti. In order to get a general overview of the operation and flood intensity we went on a field trip the next day. The information from the field trip, together with data from other sources allowed us to release a new update of the road condition map the same day.

The main task was to acquire updated information regarding the state of the roads and bridges from agencies that were travelling in the field. This information was used to update the road status map. 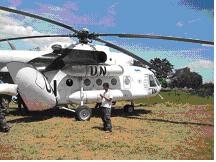 If the map identified locations as inaccessible by road, agencies could apply to UNHAS for the delivery of non food items or food items to be delivered by helicopter. Updated maps were produced ever 48 hours.

By the end of the week the flood situation was improving and the map updates and requests started decreasing. I was then able to focus on other potential outputs such as using the end of mission data to colour the sub counties according to the amount of food and non food items received.

Another output was the conversion of the comprehensive GIS database into Google Earth (.kml) format so that non GIS experienced people could access and manipulate the data by downloading it from the www.logcluster.org .

Due to the end of the emergency and the closure of the UNJLC office, no other party would update the map products. It was decided to distribute the data on DVDs to UN agencies, governmental institutions and interested NGO’s