After the initiatives carried out in Jérémie and Ouagadougou in 2019, CartONG accompanied a new project centered around participatory mapping methodologies this autumn - this time in support of the Maroni Lab, an urban experimentation laboratory that promotes reflections and debates on urban development and local cities and implements innovative development projects with the inhabitants of the informal districts of Saint Laurent du Maroni in French Guiana.

In a rather similar way to the support provided in Jérémie (Haiti) in June 2019, this project was built around three main areas of intervention:

Finally, the project's broader objective was to develop the conditions for an "urban citizenship" among the inhabitants of these informal neighborhoods - which are often excluded from local democracy - and to promote awareness about their belonging to the city and their legitimate role as local citizens.

Design of an adapted project methodology

CartONG therefore began by designing a methodology to fully involve local inhabitants in mapping activities, as well as to ensure their needs would be adequately considered. We therefore suggested to Maroni Lab to conduct two-day workshops, with a first day devoted to the co-construction of the legends of the maps and a second day of data collection in the field to support map production.

To collect data in St Laurent du Maroni, we opted for OsmAnd, a mobile OpenSource application that is free of charge. OsmAnd is easy to learn - even for people unfamiliar with tech tools, and it allows not only to collect GPS points but also qualitative and descriptive information. Additionally, in line with its usual approach, CartONG recommended the use of OpenStreetMap, the global, free and collaborative geographic database that allows both the recovery of existing data and the creation of missing data - which is generally the case for informal neighborhoods. They are indeed often poorly represented on maps (i.e. missing from the cadastre/land register), including those located in French territories.

Prior to the field mission, CartONG also mapped the informal districts of St Laurent du Maroni with the support of its volunteers. Within 2 weeks, we added more than 2,500 buildings on OSM. It was an important step, since it was useful for the smooth running of the project (i.e. being able to locate oneself more easily within the informal neighborhoods, being able to collect qualitative data with the inhabitants, etc.). Beyond purely "practical" considerations, this OSM mapping exercise was also rewarding for the inhabitants of the districts in question, who finally become visible on the maps alongside the inhabitants of the urbanized districts. 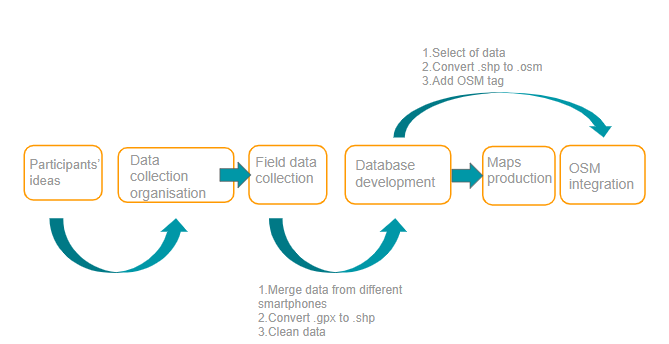 This collaboration with the Maroni Lab was an excellent opportunity for CartONG to test the capacity of our team to support the collaborative design of a map methodology, data collection in the field (with the inhabitants) and the production of a first version of the analysis maps in a condensed 15-day format. On the right, a diagram summarizing the overall approach.

In concrete terms, the field mission began with a period of training for the Maroni Lab team centered on participatory mapping workshop facilitation techniques and mapping and data collection tools - the idea being that they would become autonomous enough to replicate these methodologies in other projects.

Workshops with the inhabitants: development of the map methodology & data collection

We then conducted a couple of two-day workshops with the residents of the "Colombie" and "Chekepatty" informal districts of St Laurent du Maroni. These workshops brought together a total of 36 participants - a very satisfactory number, which is explained by the good relationship built by Maroni Lab with local inhabitants and their prior knowledge of the community which they could thus mobilize quickly; an undeniable asset for the success of this project!

The first day of the workshop was used to co-construct (i.e. design together) the legends of the future maps, or put another way, was aimed at listing the elements that the inhabitants wish to map and thus make them appear on the map. These are the same elements that would be collected in the field in the second phase. To do this, we focused the discussions around 2 main questions: 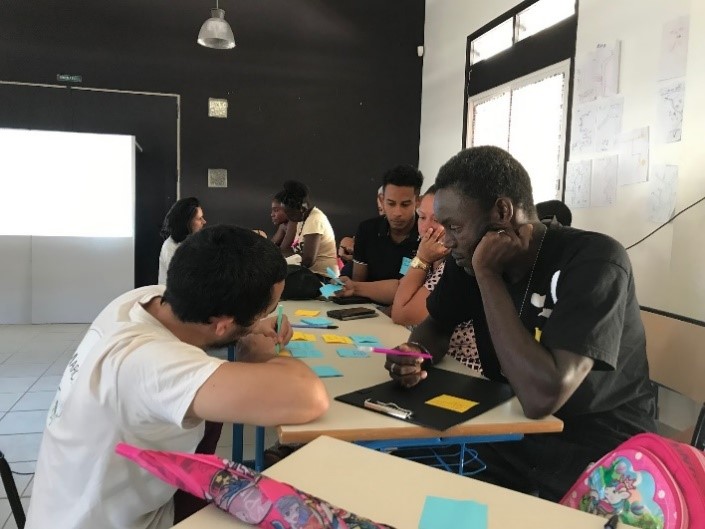 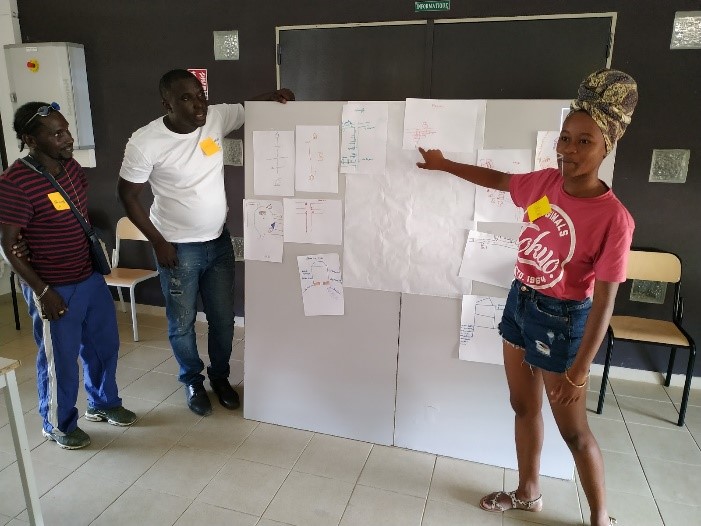 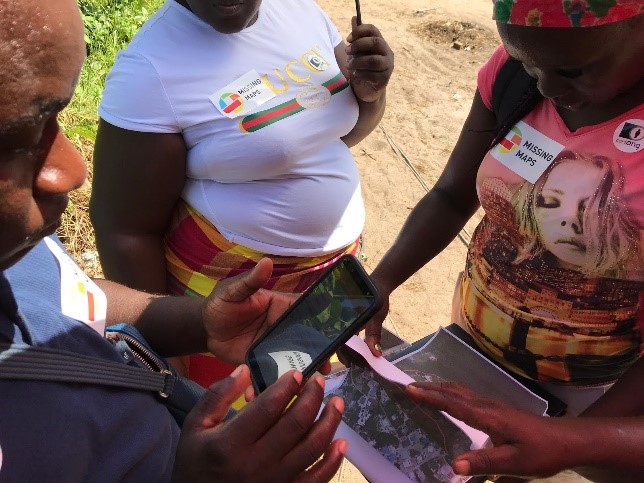 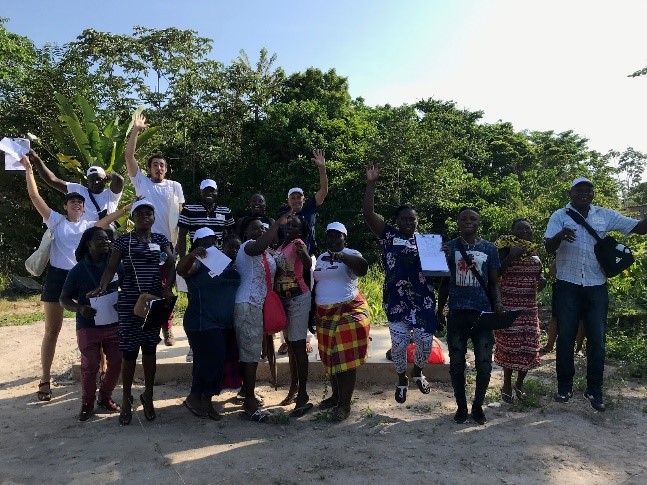 During the workshops, the inhabitants thus identified several themes that were important to them, such as accessibility and mobility in the district, access to water, waste management, nice facilities and spaces, services and shops, etc. These workshops required a lot of adaptability from both the CartONG and Maroni Lab teams in order to take into account the differences in terms of languages, cultures, technical vocabulary levels and literacy levels of the participants. 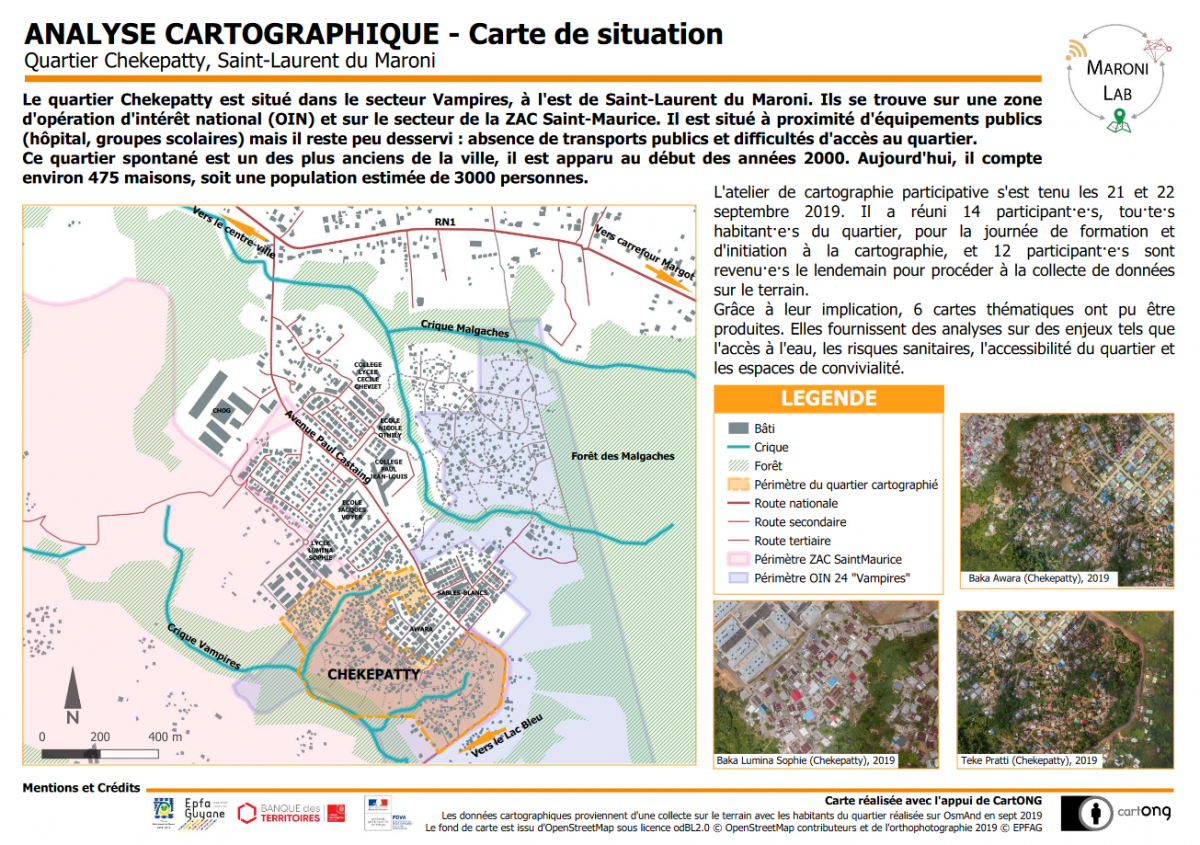 Producing maps allowing the visualization, analysis and valorization of the data collected with the inhabitants

In total, the participants collected 440 GPS points and collected a large amount of data that could be used in the Geographic Information System. The objective of the last part of the mission was therefore to organize this data in the form of a simple database and to produce several analysis maps. Beyond the simple visualization of information, it was important that the maps also reflect the thoughts of the inhabitants (as collected during the workshops) and make it possible to convey a simple and visually attractive message. We produced a series of 12 maps - a first version during the mission, then a version finalized in the weeks following the mission - around the themes pre-identified by the inhabitants and built as advocacy tools. You can discover them on the left (click on the images to view them in large format). 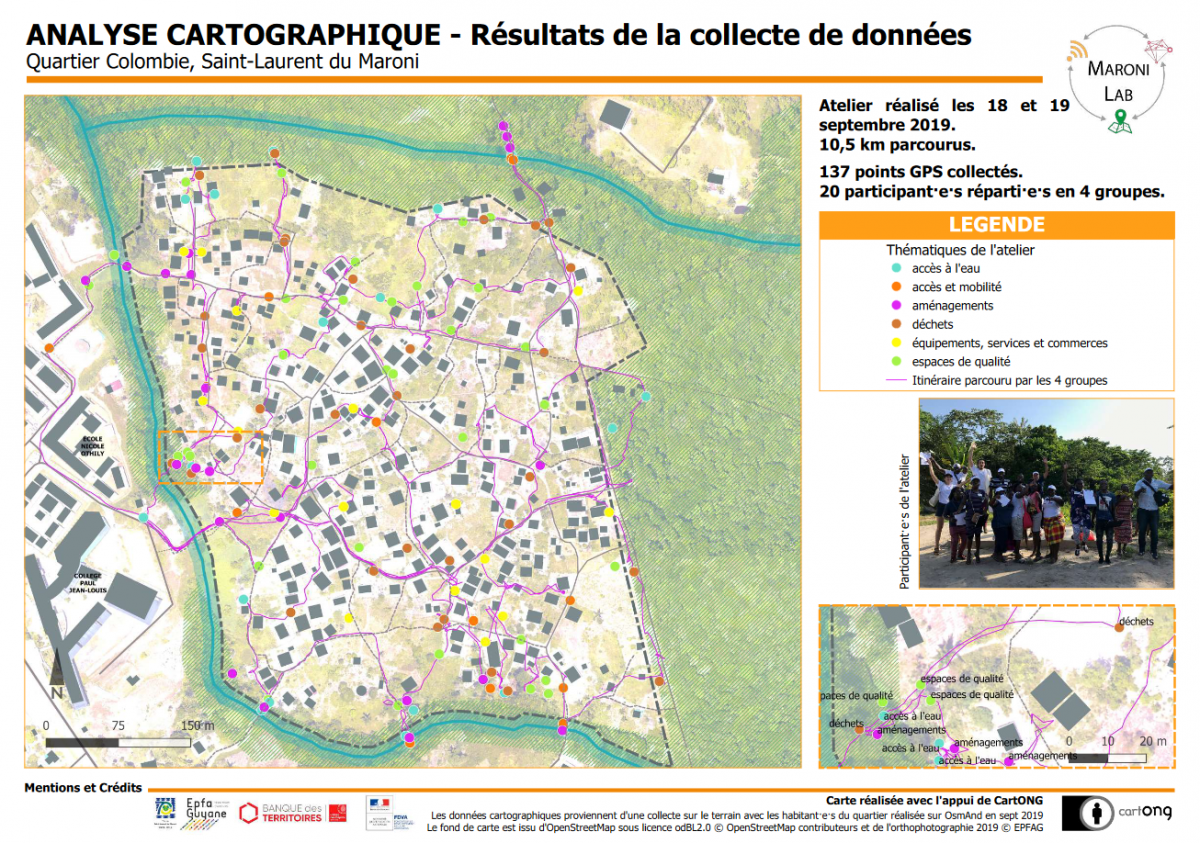 The mission ended with the presentation of the first versions of the maps to the local inhabitants (photo below © Maroni Lab), who quickly expressed ideas on how they could use them: bringing their neighbors together to better analyze problems within the neighborhoods and find solutions, presenting them to the municipal team, organizing an exhibition, etc. Initial feedback was very positive and the sign of a successful project both in terms of the involvement of the inhabitants (and their increased awareness as citizens) and in terms of the result - i.e. the maps. Local residents seemed to appreciate the work conducted and to see the potential of maps for local advocacy. 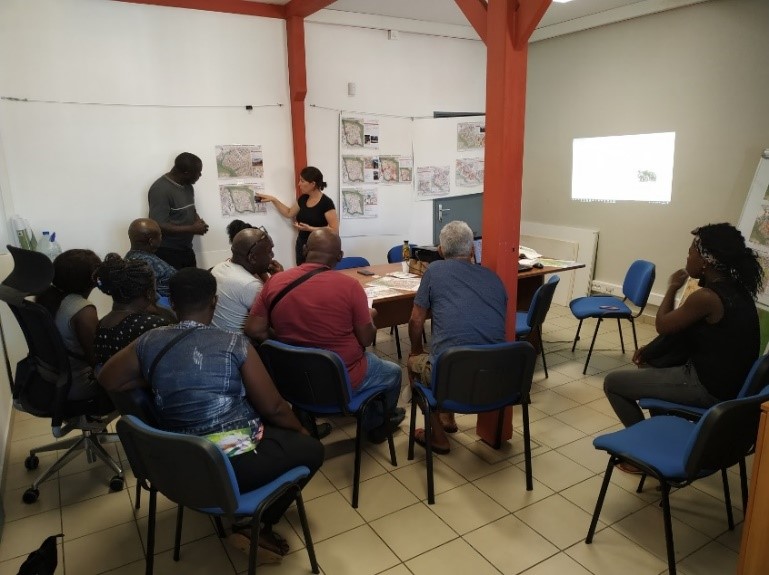 Less than 6 weeks after the mission, the Maroni Lab has already taken action to follow up on this participatory mapping project. An institutional meeting was organized with local representatives, who appeared to be very receptive to the project and made several constructive proposals to improve the living conditions in the informal districts of St Laurent du Maroni.

The maps produced by CartONG thus proved to be very good visual aids to support the discussions and give more weight to (pre-existing) analyses or observations that lacked a communication support or concrete data. The collaborative nature of the process and the fact the maps were based on information collected by local inhabitants, was also a decisive factor in "being heard".

This project made it possible to reinforce the role of the Maroni Lab in the eyes of the local institutions to conduct concrete actions aiming at improving the living conditions in the informal districts of St Laurent du Maroni and to support ongoing development projects in the city. It should also help Maroni Lab get funding to finance future activities.

On CartONG's side, the project made it possible to test the integrated participatory mapping methodologies that we have been developing for several months under "optimal" conditions: a dynamic and well-established local partner, a simple administrative/security context (a French overseas territory), favorable technical conditions (good level of resolution of the satellite imagery, availability of smartphones, Internet, etc.). This has allowed us to document and refine many aspects that we can now offer to other partners, even in more difficult contexts. A huge thank you to Maroni Lab for offering us this opportunity!

To learn more about this project, discover the testimony of Maroni Lab here (in French).

And don't hesitate to contact us if you would like to develop a similar approach in your area of intervention!