The Briefing Tool, a new ergonomic and touch-sensitive tool for MSF!

The Briefing Tool, a new ergonomic and touch-sensitive tool for MSF! 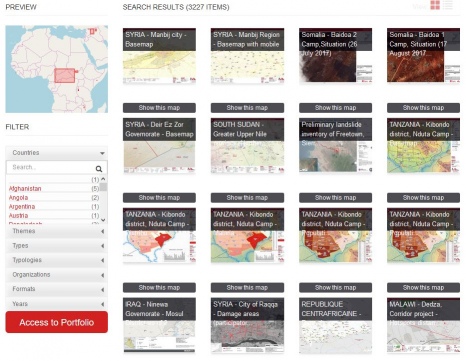 In line with the partnership developed between Doctors without Borders-Switzerland (MSF-CH) and CartONG since 2013, and the subsequent widening to all 5 operational centers of MSF in 2016, CartONG actively supports the organization in the definition of its Geographic Information System (GIS) needs and the implementation of a global GIS development strategy.

This collaboration, implemented with the support of CartONG towards the MSF GIS Unit, has led to the creation of a Map Centre, an online library currently containing more than 3,200 base maps of the countries in which MSF operates, which is regularly updated as MSF deploys its activities in the field during humanitarian crisis.

In keeping with this work and the improvement of the Map Centre, MSF asked CartONG to develop an online tool allowing for better contextualization of daily briefings. The main idea behind the request was to have access to an interface, where the user would could both generate data or draw information as it is possible on Google Earth. Either beforehand or live, the briefings could therefore be contextualized as the cartographic interface would contain the MSF baseline data. 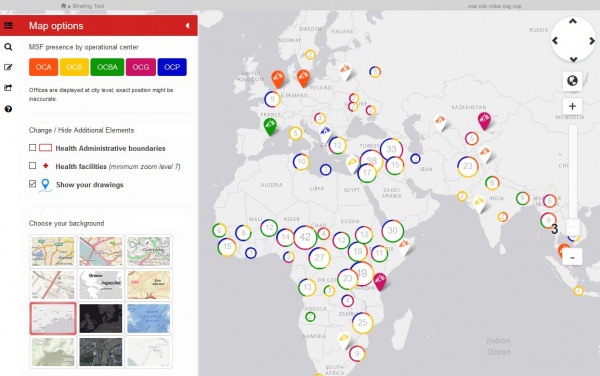 CartONG therefore started tackling the task, focusing on the technical specifications provided by MSF: the tool was to be designed to be easily accessible by users, ergonomic and touch-sensitive in order to be compatible with the touchscreens used by MSF operational centers and emergency units in the field, and during the MSF daily briefings.

The work conducted by CartONG led to the creation of the « Briefing Tool », named as such as it was destined to play an important role during the daily briefings at MSF. The Briefing Tool is accessible via the Map Centre by all MSF staff and consists of a dynamic world map with an interactive sidebar allowing the user to select sets of information and relevant base maps for the presentation of the day.

The final tool is built around 4 main functions:

The user can first of all select a specific geographic area. The image to the left shows for instance Mali.

The user then can select information who he/she deems relevant for the presentation such as MSF baseline information, health administrative boundaries or health facilities. The user may also select between 12 different backgrounds.

The user has also the option of displaying additional information on the map by using the drawing tool and saving its own data onto his/her pre-selected map.

Lastly, the user may export the map as a PNG or JPG image, or under a KML format to share with other MSF staff.

As such, the Briefing Tool is a powerful working tool, allowing MSF teams to better communicate internally, and to facilitate decision-making during the implementation of activities in the context of a humanitarian crisis.

A global reflection was undertaken by CartONG to select the best-suited technologies to create this new tool. For the first time, CartONG chose to develop an application with OpenLayers3 in order to ensure it would be touch-sensitive. This global reference database is a PostgreSQL database, served by ArcGIS Server – an ESRI technology already implemented by CartONG for MSF.

The development of the Briefing Tool was challenging at times for CartONG, but all technical issues were ultimately overcome. In particular, the drawing function for touchscreens was difficult to create, but the CartONG team is very pleased with the final result. The development of the tool also had unhoped consequences, especially when the team realized how powerful the Open Layer 3 application was – a discovery which has had a general impact on web development at CartONG. In addition, CartONG asked for an expert to test and validate the usability and user experience proficiency of the Briefing Tool. The collaboration with the user-experience expert was deemed very positive and should be renewed at the occasion of future CartONG projects.

The development perspectives of the tool are now centered on standardization and on the creation of plugins to allow for scaling and duplication in anticipation to future projects or potential adaptation of the Briefing Tool to a different work setting.