Building a lasting GIS infrastructure in a camp setting: a 4-week mission in Bangladesh in support of MSF France

Building a lasting GIS infrastructure in a camp setting: a 4-week mission in Bangladesh in support of MSF France 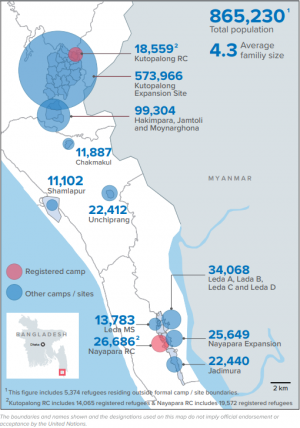 A CartONG staff was deployed with the MSF GIS Unit in Bangladesh for 4 weeks in order to provide support to MSF France activities in the Kutupalong refugee camp site. Here is the account of her mission.

The work of MSF France in the main camp site

Early March, the Rohingya crisis in Bangladesh had reached its six-month mark, with the main influx peaks happening between August and December 2017. According to UNHCR (see opposite map dated March 2018), there are currently around 900.000 Rohingya refugees living in the camps, mainly concentrated in the Kutupalong Expansion site. New camps are being set up at the west part of Kutupalong Expansion site by the Site Management and ready to host the new arrivals. All the efforts are now focused on preparing for the upcoming rainy season, including population relocation from the areas which are most at risk and distribution of emergency kits.

MSF France has been present in the field since the beginning, handling mostly medical activities. MSF France is currently running three outpatient departments (OPDs) and one inpatient department (IPD), and also monitors mortality rates and disease alerts in the camps. In addition, MSF France is also involved in WATSAN activities (i.e. water, sanitation and hygiene), helping build the water network as well as distributing aqua filters. MSF France is in direct contact with the other MSF operational centers and provide logistical support to all of the MSF teams present in the camps. 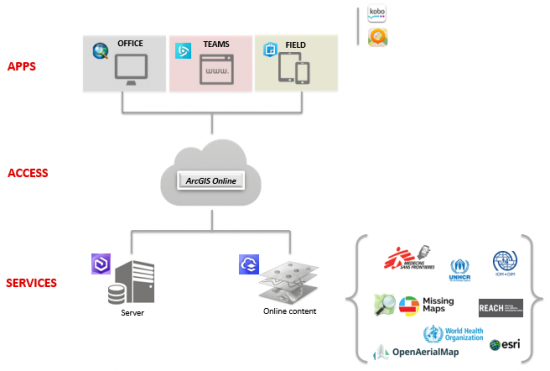 In order to coordinate the work of the medical, WASH and logistical teams in the field, MSF France relies heavily on GIS tools. For instance, data collection of the facilities and points of interest in the camps is done through Collector for ArcGIS. Data collection concerning the aqua filter distributions is done on KOBO Collect, while the team used OsmAnd to navigate in the camps. Additionally, the GIS Officer working for MSF France is responsible for answering map requests for field teams, dealing with various data sets essential to their work and assisting the data collection team.

The GIS system which was put in place at the end of 2017 by MSF France alongside MSF Netherlands, is designed for emergency response. The system was built to be flexible and adaptable during the emergency phase, and was comprised of the following elements: 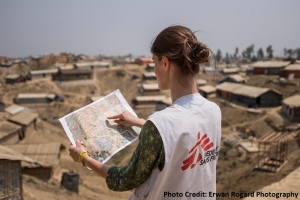 The main objective of the mission was to make the passage of the GIS activities in the field from an emergency status to a more stable one. To this end, our GIS Officer, Roxana, was in charge of assessing the current architecture of the system and standardize the database model base. She thus had to stabilize the database schema so the data could be migrated from the old format to the new one. In order to prepare the system to be easily updated, it was also important to inventory all the data sets that could be of interest, together with the source and the update frequency. This way, it would be easier to integrate them in the database.

As the structure was reviewed to become more stable, another fundamental part of the mission was to launch the recruitment of a GIS national staff to be permanently based in the camp to coordinate the GIS activities in the long run. Roxana was also involved in networking with the other MSF operational centers to better collaborate on the use of GIS for the operational activities. It is particularly important to do so with MSF Netherlands since the GIS system is common, but also with MSF Spain and MSF Belgium who had expressed interest in finding more about the system which had been set up. Networking with other humanitarian actors present in the field, especially on ways to collect and share geospatial information available for the camps, was also a big part of her job.

Alongside these two main activities, Roxana was also in charge of coordinating the data collection team and help them better organize their daily data collection in the field. It was also part of her mission to answer all map requests coming from the MSF France medical, WASTAN, surveillance and outreach teams. 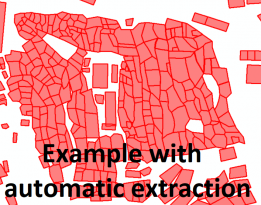 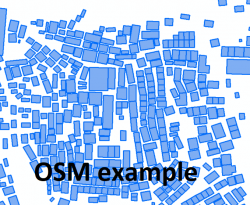 Since the beginning of the crisis, the OSM community have been doing a great job in digitizing the shelter footprints based on drone imagery provided by IOM (International Migration Organization), and the OSM data actually proved to be the most detailed and most accurate data source from all. In the early phase, in particular, as there was a lack of data on the population, MSF France relied heavily on the OSM shelters footprints data to calculate an average of the population distribution in the camp. OSM data - such as the shelters footprints - was useful for calculating building density and to highlight the areas that are the most at risk in case of flood and landslides.

The input of the OSM community has thus been very useful. “The ability of the OSM community to mobilize a large number of people through mapathons, and rapidly populate the database for an area where we don’t have other data sources to rely on, is very impressive”, explained Roxana upon her return from the field. “Another advantage of using OSM data is the fact that the OSM data is created manually, not automatically extracted from imagery, which makes it highly accurate.” she added.

A challenging yet successful mission 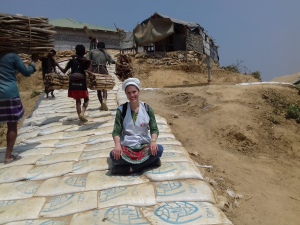 The main challenges of this deployment was that it was our GIS Officer’s first mission and since it was a rather short one, it was key to quickly understand the MSF activities and strategy to meet the mission’s objectives. In her own words: “even though it was a short mission, it brought me a lot of assets! There were many “firsts” during this one-month mission: first time deployed with MSF, first humanitarian mission, and first time in Asia. It was also the first time I had to manage a team, the first time I had to coordinate a recruitment process, the first time I worked in a “multi-tasking” environment, with GIS requests coming from different teams. I loved being part of a multi-disciplinary team, discovering what everyone was doing in his job and through this having a clearer understanding about MSF activities implemented in the field.”

In short, during her mission, Roxana managed to define a new database schema and the data is currently being migrated from the old format to the new one. New datasets were also created and are being imported into the database. She was also able to create a grid to improve data collection in the field. The recruitment process is also well advanced. Discussions between MSF operational centers are continuing, so are the ones with the other humanitarian organizations so MSF France continue to be actively  implicated in the ecosystem present in the refugee camps.

Since the beginning of the crisis, CartONG - as part of the GIS Unit - has offered a continuous remote support to MSF for the GIS system implementation in the field. The main activities were focused on implementing the system on the cloud technology for the emergency phase and preparing the server architecture for the stable phase. In terms of database population, CartONG has also developed an automatic workflow for extracting the OSM data that is useful for the operations in the field. It is worth mentioning that GIS support was provided beyond the scope of MSF. Since the beginning of the crisis, CartONG has indeed been providing support to its long-term partner, UNHCR, in the implementation of its GIS activities in the camps, as well as Solidarités International for out-of-camp mapping & mobile data collection.

This field experience was shared with the other humanitarian actors during a presentation at the ESRI Conference “GIS for a Sustainable World” which took place in Geneva from April 17th to April 19th, 2018.

This article is also available in German on the website of our volunteer project Mamapa.