Earlier this year, CartONG was contacted by ECPM (Ensemble contre la peine de mort), a French NGO dedicated to the abolition of death penalty worldwide to build an interactive web map that would display the status and key statistics on death penalty in each country of the world and help support their advocacy work as the NGO was celebrating its 20th anniversary.

The situation on death penalty varies heavily from country to country. Some countries may still have the death penalty in place but no executions have taken place for dozens of years. In other countries, executions are taking place almost on a daily basis. In certain countries, the policy on death penalty changes with each government and thus, keeping the track of the latest situation in each country can be difficult.

To support the dissemination of information, CartONG has built an interactive web map that brings together the key facts and figures related to death penalty in each country of the world. In addition to the status on death penalty, the map is displaying figures such as the number of executions in the recent years, methods of execution, and the number of prisoners in a death row. Special infographics are available for countries where ECPM is currently active. The map is available in both French and English.

The use of a custom technology for a positive user experience

After reviewing the map requirements, CartONG chose to build the map on custom JavaScript technology. This allows accommodating the data visualization elements as requested by the ECPM without diverting too much from the organization’s visual identity. With a custom user interface, the map is easy and intuitive to use. Also, thanks to the custom technology, the map is performing fast, maximising a positive user experience. The data feeding the map is stored on a Google Sheet, maintained and updated by the ECPM staff. This Google Sheet is exported into a JSON file which is read by the map application. Such a solution helps to ensure faster performance and clean data in the map. 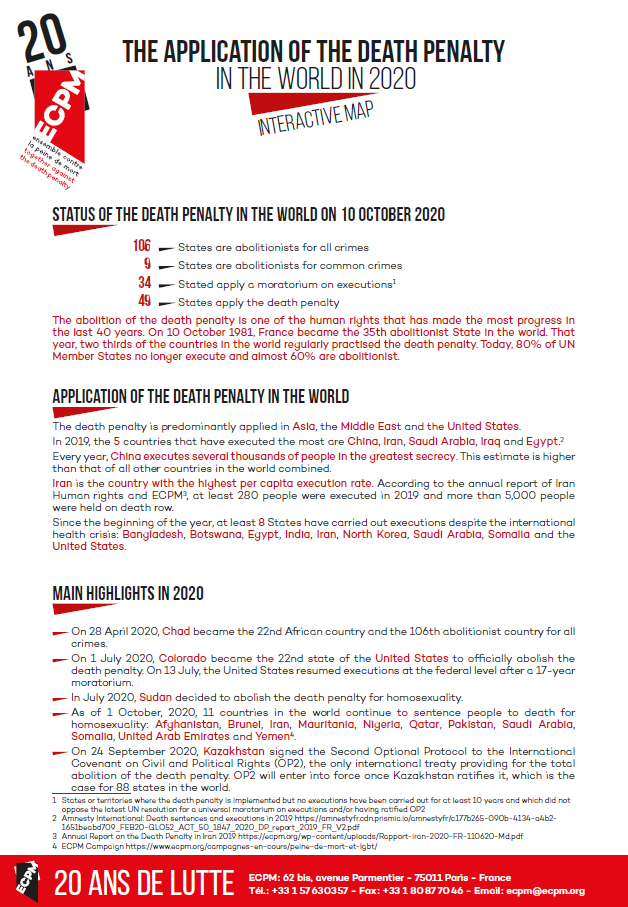 The official publication date for this new web map is on 10th of October, the 18th World Day Against Death Penalty. This map is expected to support not only ECPM, and its advocacy work, but also everyone seeking to find information about the global death penalty situation. Hence, in addition to ECPM, the map will benefit many other international and local actors working towards abolishment of death penalty.

Ensemble contre la peine de mort (Together Against Death Penalty), established in 2000, is a French NGO advocating for abolishment of death sentence. While there has been a steady decline in the number of countries practicing death penalty, there are still 55 countries  in the world in which this practice is legal. ECPM is working many countries worldwide, lobbying the governments and raising public awareness about death penalty.