CartONG has been supporting the UNHCR WASH team for 3 years on the deployment of WASH Knowledge, Attitudes and Practices mobile surveys in many countries. Over the last year, everytime we trained UNHCR and implementing partners on how to best deploy WASH KAP surveys in the field, we have been promoting the mapping of the refugee camps mainly for two reasons: 1. It helps to plan out the survey logistics and the sampling, and 2. It allows to analyze survey results by taking into account the spatial context and the actual location of the WASH infrastructure. We believe that doing so helps improve the overall access to WASH services for refugees in the long run. 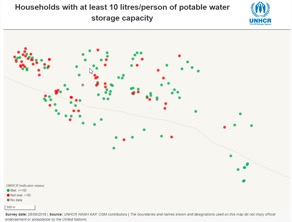 While surveys are often used in refugee camps to gain an overview of Water & Sanitation practices, it is not common to map out the survey results.

Indeed, in the last few years, the WASH KAP survey deployments usually occurred without paying attention to whether a base map for the camp was available, which meant that the household survey results would be plotted on empty canvas (see opposite), and consequently would not be of much use to understand the spatial context and answers based on the actual location of the infrastructure.

Whilst mapping out the results without a basemap allows at least looking into the distribution and the sampling to see if similar answers are clustered in the same area, it sends the survey manager back on the ground to understand if it is the same water source that could have a potential issue leading to households not meeting the minimum standards of quantity of potable water or if this is caused by other elements.

Adding camp mapping as a pre-step to support survey deployments

Aware of these challenges, CartONG therefore decided to review its pre-deployment approach and suggested, where feasible, to add a first step - mapping refugee camps - to the process. As usual there are different ways, tools and approaches to map out an area. Depending on the type of location, for instance, rural or urban, type of activities and the way these activities amongst the actors are coordinated, an approach suitable to the context, the scaling and the funding needs to be picked. Whilst CartONG also supports larger UNHCR camp mapping activities based on specific data requests from different sectors resulting in an UNHCR hosted database, there is not always the time, the resources and the place to organize such an integrated effort where maintenance, capacity building and keeping attributes up to date needs to be thought through to make it sustainable. Hence CartONG was exploring lighter ways to achieve the creation or improvement of a base map which need less long-term commitment as based on a platform and a community effort.

In the past year, in preparation of different WASH Household surveys planned in Cameroon, Republic of Congo, Burkina Faso, Uganda and Sudan, CartONG has supported the mapping of the camp before or in the first days of the mission. This exercise was conducted either by dedicated field staff doing a comprehensivemapping of the whole camp on the ground, or by setting up a collaborative mapping effort through the OpenStreetMap project.

For the latter, mapathons were set up in Europe prior or during the mission to help map everything that could be mapped from afar on the relevant camps, out-of-camps or settlement areas of refugees. The mapathons were organized through the Missing Maps project of which CartONG is a member: volunteers remotely mapped the areas of interest on OpenStreetMap using satellite imagery, after which - when feasible - data was improved collecting relevant information with UNHCR staff in the field and then used for analysis in different mapping products.

This was notably the case for the WASH KAP survey deployment mission in Kiryandongo (Uganda), which took place in July 2018. CartONG managed to organize simultaneously (see opposite) a mapathon in France - with the support of a migrant center in France and its partner Bibliothèque Sans Frontières - and another one in Masindi (close to the refugee site) with the participants of the WASH KAP training which was given by CartONG at the time.

Both groups of volunteers benefited from the local knowledge and extensive work which had previously been done by the Uganda Humanitarian OpenStreetMap Team on the Kiryandongo camp’s WASH infrastructure data, and who also helped run the Masindi mapathon.As such, CartONG was able to build on the local partnership between HOT and UNHCR while linking up with the global WASH KAP strategy of the UN agency. This is a great example of how OpenStreetMap, as an open data sharing platform, naturally generates collaborations between humanitarian organizations.

What are the concrete impacts of this added step? Looking into the example of Bétou

The implementation mission which took place in the Republic of Congo last December, is a perfect example of how this added step of mapping the camps and settlements can have a significant impact on the planning of a survey on the ground.

Right before the start of the mission, we realized that the targeted areas where refugees were living - Bétou and Ikpemgbele - were barely mapped (see below on the left for the example of Bétou). In Bétou, as the survey deployment was supposed to be conducted in a urban setting - where density of population is high - not having a map to navigate and also organize the enumerators’ work would have proven extremely challenging. CartONG thus decided to initiate a significant OpenStreetMap exercise to help map the buildings, roads, points of interest and administrative areas of the city of Bétou (see above on the right). While the remote CartONG volunteers mapped the buildings and roads, the UNHCR in-country staff were concentrating on the administrative boundaries of the neighborhoods which, although known and shared orally, had never been mapped before. 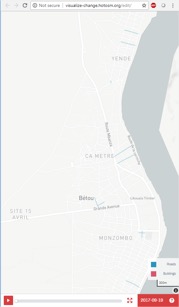 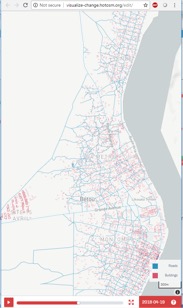 Our staff in the field thus conducted a community mapping session with the UNHCR in-country team to collect and centralize the data. It was then used to ensure common geographical reference during the survey implementation. In the end, the mapping work conducted for Bétou was essential for both the geographical survey sampling strategy and for the data analysis in these out-of-camp settings. A similar work was conducted for the Ikpemgbele area. Following this mission, a series of maps were produced to help the UNHCR WASH teams get a better understanding of their intervention zones.

Keeping up the good work! 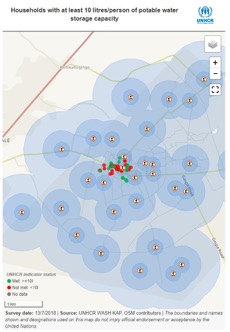 Mapping was not only conducted for Bétou and Ikpemgbele (Republic of Congo) andKiryandongo (Uganda), but also for the two camps in Mentao and Goudoubo(Burkina Faso). Overall, a total of 9 241 buildings and 99 kilometers of roads were added onto OpenStreetMap.

Thanks to these contributions, the WASH KAP survey results became visible on an updated background map for all 3 areas. It then allowed UNHCR staff to conduct analysis and take informed decisions regarding the provision of access to WASH services to refugees in the camps and settlements. On the left, is the example of the WASH KAP pilot results conducted in Kiryandongo are showing on a map of the refugee settlement thus helping to visualize water storage capacity of households and relating it to the proximity to boreholes.

As shown in these examples, putting emphasis on the mapping of the camps and settlements in the pre-mission phase has proven relevant to facilitate survey deployments and to more easily analyse survey results by taking into account the spatial context and the actual location of the WASH infrastructure. As such, it has reaffirmed our belief that by doing so, we can help improve the overall access to WASH services for refugees in the long run.

CartONG intends to continue working towards this goal. To this end, we organized our first mapathon at the UNHCR Headquarters in Geneva last July in order to map additional refugee camps in preparation of our next WASH KAP survey deployment, currently underway in Kosti (Sudan). The next steps will be to further integrate this effort with other site mapping initiatives happening within UNHCR, to ensure a holistic approach. We are currently also looking into making OSM data more easily available and searchable in a dedicated GIS database and to push data intended to reach a wider audience and collected through other methods like ArcGIS Collector to the OSM platform. Data interoperability is very important to be able to make use of datasets from different channels. So watch this space, we will be posting on our progress to harmonize different data sets for an integrated camp mapping soon.

Want to learn more about the incredible work of the staff and partners of the Public Health section of the UNHCR in refugee camps? Have a look at the trainings and associated documentation package available on the UNHCR WASH KAP survey modules page. Its primary goals is to train UNHCR staff on deploying WASH KAP surveys to their local contexts using mobile technologies.

Want to continue this conversation and learn more about CartONG's work in support of UNHCR? Please meet us at the 2018 GeOnG Forum in Chambéry from October 29th to October 31st, 2018. More information & registration here: http://cartong.org/geong/2018