As part of the partnership with Doctors Without Borders-Switzerland (MSF-CH), CartONG was entrusted in 2019 with managing the transition from ArcMap to ArcGIS Pro so as to align with the upgrading of the GIS infrastructure carried out as part of the GeoMSF program. Here is our step-by-step feedback detailing the full migration process.

CartONG has been working in partnership with MSF since 2013, providing in-depth technical support to the MSF GIS unit since its creation in 2014. In this context, our teams have been working on the implementation of the MSF movement’s GIS strategy. CartONG also provides remote or field support through map production, the development of web applications and field data management, with a strong focus on capacity building. Since its creation, the MSF GIS unit - which is working in support to the operations in crisis contexts (e.g. epidemics, population displacements, natural disasters, etc.) - has been using ArcGIS Desktop (a tool of the ESRI’s product suite) and, in particular, ArcMap as mapping software. Please refer to the table in the following section for more details.

Why was the migration decided?

When the GeoMSF program - responsible for upgrading and scaling up the GIS infrastructure at MSF - began in 2018, the choice of desktop mapping software was reconsidered. After a first phase of analysis and following ESRI's announcement at their annual User Conference in San Diego, the MSF GIS unit decided to test and then migrate to ArcGIS Pro.

Indeed, if ArcGIS Desktop would be maintained until 2024 (with the release of the final 10.8 version), ESRI specified during the conference that no additional features would be issued for the software, except for a few corrective patches. The decision was made so that ESRI could focus on the development of ArcGIS Pro instead.

In comparison, ArcGIS Pro - operational since 2015 - is based on a 64-bit NET architecture and thus offers the possibility of optimally using the full power of a modern computer (unlike ArcGIS Desktop). Since its initial release four years ago, ArcGIS Pro has successfully integrated a significant part of ArcMap's functionalities as well as new tools (for example: aggregate into bins). The current version of ArcGIS Pro (2.4.2), is now mature enough for daily use. Below is a quick comparative table of the main hardware parameters of the two GIS tools.

It is thus in this context and as part of the implementation of the GeoMSF program that the choice was made by the MSF GIS unit to explore the possibility of a migration between ArcGIS Desktop and ArcGIS Pro in 2019.

What were the main steps of the migration to ArcGIS Pro? 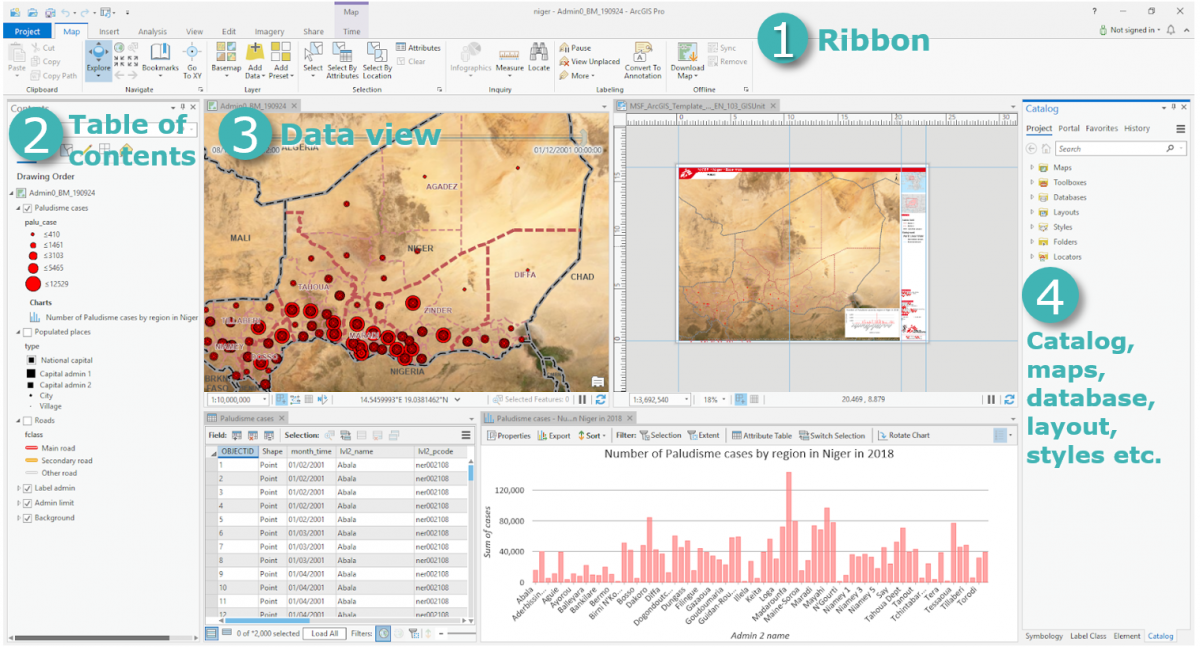 March 2019 - Exploration phase: this phase began with CartONG's participation to the ESRI User Conference in San Diego in July 2018. It was followed by a two-day ESRI training course in September 2018 and by researching blog and forum reviews (Géonet, Géorézo, etc.). In the first quarter of 2019, extensive internal technical tests were then conducted by our team. In addition, using a self-learning approach with the help of ESRI's online tutorials, our team was able to carry out a comparative analysis between both programs. In addition to newly available features and software performance, one of the major changes with ArcGIS Pro happens to be the management of data and the organization of files and projects. The creation of independent.mxd files no longer exists. Projects – including maps, data, toolboxes and layouts – are thus now centralized in a unique workspace (as shown below).

April 2019 - Evaluation phase: we then carried out an inventory of the needs of the MSF GIS unit (speed of data display, organization of the workspace, spatial analyses, connection with ArcGIS Online, etc.) in order to assess which tests and functional evaluations should be carried out on ArcGIS Pro. This second phase allowed us to clearly list the advantages and disadvantages of ArcGIS Pro: a decisive step in the decision-making process that enabled MSF to make in turn an objective decision about migrating to ArcGIS Pro - the results of the evaluation being mostly positive.

Below is an overview of the dynamic ribbon: the functionalities are shown according to the type of data (vector, raster) and the workspace (layout, data view): 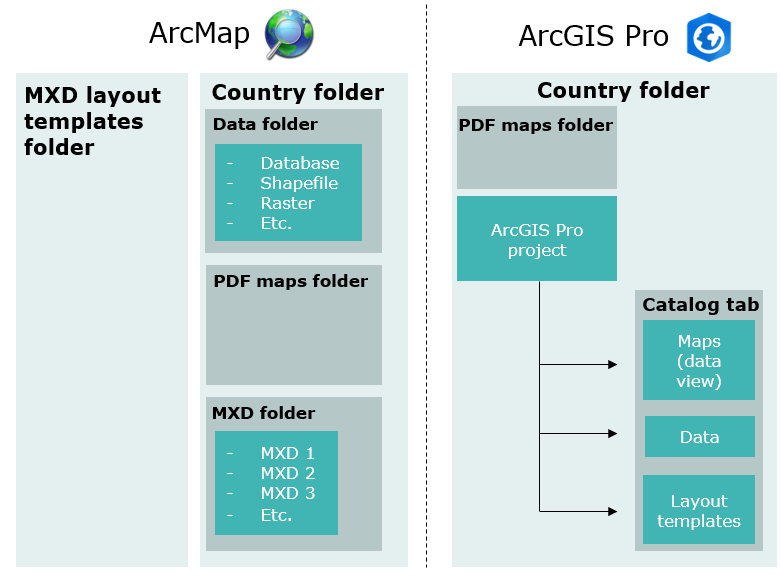 May/June 2019 - Adaptation phase: during this third phase, the transition from ArcMap to ArcGIS Pro was discussed, including rethinking the workspace. The MSF GIS unit is used to organising GIS data and projects by country. We therefore moved from an organization by folders and sub-folders (composed of multiple MXD projects for each layout), to an organization with a single ArcGIS Pro project for each country (see below). As a result, all data sets and maps are centralized in the same project, optimizing map production through more fluid reuse of layouts and data sets, but also better metadata tracking.

During this adaptation phase, we also discussed further introducing the use of the Portal for ArCGIS. This application allows headquarters and field teams to exchange data, or import and modify ArcGIS Online maps in online and offline mode. In addition, we had to find new solutions to work offline, figure out new work practices, adapt layout templates and write documentation/tutorials for the MSF GIS unit (including field teams).

July/August 2019 - Transition at headquarters: a first roll-out phase was carried out with the HQ teams based through trainings on how to use the ArcGIS Pro software and how to share documentation. From this moment-onwards, all maps created in a normal context (i.e. not during emergencies) were produced using ArcGIS Pro. At the same time, feedback sessions made it possible to adapt the working method and documentation to better prepare the transition for the field teams.

September/November 2019 - Transition for field teams: the second roll-out consisted of making sure the field teams would familiarize themselves with ArcGIS Pro. 6 hours of training were delivered during the MSF GIS week to support this second step. The sessions in question also allowed for discussions and feedback between the headquarters and field teams, which in turn contributed to the improvement of the existing documentation and practices.

Where do we stand now with the migration process?

During the migration process, our teams met several obstacles though. The first difficulty was technical, since some features are not yet supported by ArcGIS Pro (notably the "Distributed Geodatabase toolset" function), or are still in development. Conducting a successful ArcGIS Pro migration also required breaking old habits - the ones acquired by using ArcMap - and seeking to understand the operating logic of ArGIS Pro - in particular by using the dynamic ribbon and the project concept, workspace, replacing the .mxd. document. Carrying out a migration in fact implies investing a significant amount of time to facilitate change management, since it may prove difficult to convince the rest of one’s team - who have little experience with the new software - of its added value.

The ArcGIS Pro migration orchestrated by CartONG was organized gradually. It presently remains partial within the MSF GIS unit, since the field team is still free to either use ArcGIS Pro or ArcMap. It is in fact important that the headquarters team, like the field team, takes the time to fully feel comfortable with the new software. In addition, several technical aspects - which would help enhance its use (such as the absence of a replica) - are still pending.

What were the main lessons learned? 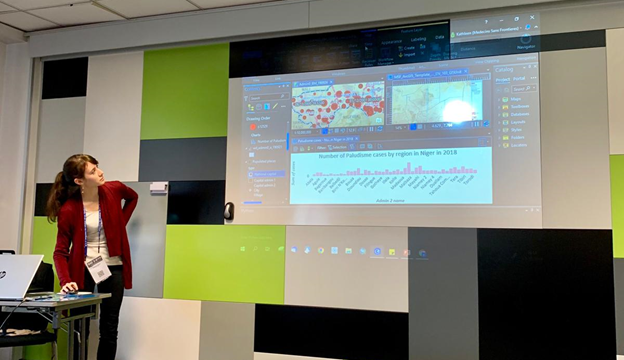 If your organization is also considering migrating to ArcGIS Pro, it is important to ask oneself the right questions before starting the process:

These feedback were presented by CartONG at the ESRI francophone conference (SIG 2019) in October 2019.

It is also important to keep in mind that ArcGIS Pro is still under development, although it has been made a priority by ESRI. The good news is that the software is evolving rapidly, with a 2.5 version already planned for July 2020.

What are the next steps?

Among the next steps for the ongoing migration, CartONG and the MSF GIS unit plan to monitor and support the headquarters and field teams by strengthening ArcGIS Pro’s practices through the release of webinars, and additional documentation and tutorials.