Interview of Roch, the artist in residence of the last GeOnG!

Interview of Roch, the artist in residence of the last GeOnG!

What is your project? 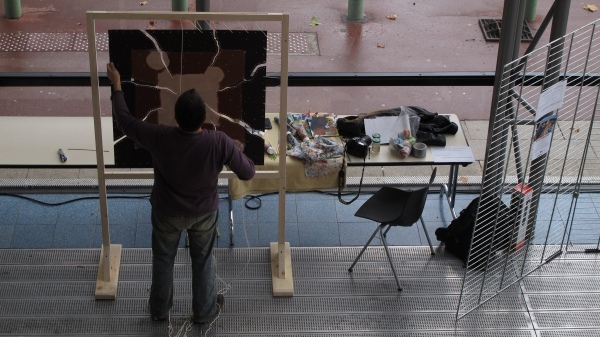 I am an artist who paints on request. My project is to offer solutions to events or decorative projects for companies and other organizations. The main goal of my work is to link Art with their philosophy and environment.

During the last GeOnG, the idea was to offer an artistic outlet to the participants, which inspires and invites them to reflect upon their work and field of expertise. Sometimes, Art can also trigger memories or emotions, as he did for one of the participants who was reminded of Cameroon by one of my paintings.

Why did you want to take part to GeOng?

I heard about GeOnG from Maeve de France, whom I met last year. We saw each other prior to GeOnG to discuss the project and this is when it became obvious I would take part into the event.

What I thought was interesting is to touch cartographers and people from diverse backgrounds and countries through art and in relation to the theme of the event. To me, GeOnG was also important because it was the first event for which I was performing as an artist. It was a true confirmation of my artistic project.

Can you explain your triptych to us?

This is a painting organized around 3 separate canvas related to past, present and future. The idea was to work on the themes of population displacements and digital technologies. 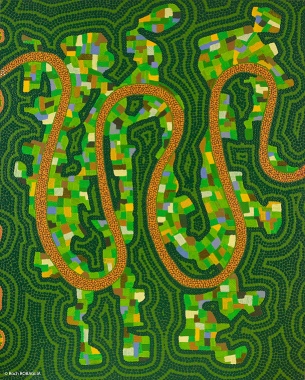 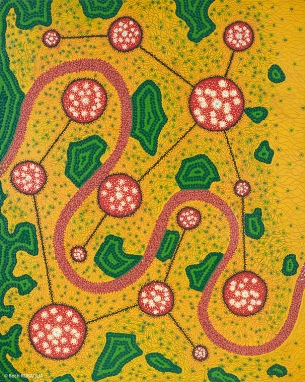 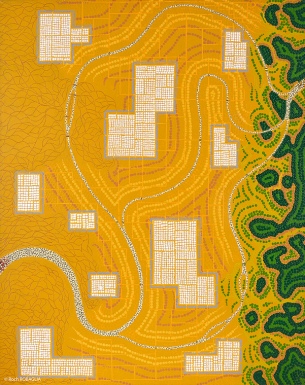 The first painting represents human settlements in a safe environment. The second one is built around the idea of population displacement caused by conflicts, epidemics or natural disasters. Each person may interpret it as his/her wishes. On the third and last part of the triptych, human beings are gathered in camps. If you look close enough, the triptych is built in a way that people may cross from one painting to another, and therefore move from one state to another.

This work was a good opportunity for me to learn more about CartONG and the work of other organizations which took part in the GeOnG event. I was trying to understand how cartography works and I was inspired by many of its aspects. I was interested in exploring the idea of what is hidden (for instance forests) and what is visible (for instance crops). The painting also shows a desert marked by traces of human passing. I wanted to show different topographic and climatic contexts. The river connects each part of the triptych and passes through different landscapes ranging from tropical to arid areas. I also found inspiration in researching about Sahel, Amazonian rivers and African forests. Information provided to me by CartONG on refugee camps and maps was also very precious to feed my graphic reflection. 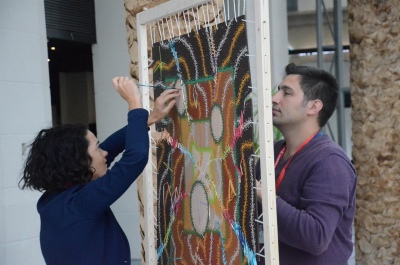 Can you tell us the story about the collaborative painting?

For this second painting, I was interested in natural disasters and their subsequent impacts. In the event of an earthquake for instance, the earth gets permanently damaged. Tectonic plates move and cannot be put back in place, hence the fact that maps evolve, change. In a way, it is also part of cartographers’ work to recreate links, thanks to their work and by constantly adapting and modifying maps.

Roch is currently working on other projects surrounding 3D technologies, the design of contemporary urban furniture and other orders. He is currently exhibiting his work at a co-working space in Aix-les-Bains called “MUG2” until the end of September. He will also be exhibiting next Spring at Chapelle Vaugelas in Chambéry from April 23rd to May 9th 2018. You can learn more about Roch and his artwork on Facebook & on his website.

*The GeOnG is an event organized at Centre de Congrès le Manège in Chambéry every two years, which brings together all humanitarian actors and information management and cartography professionals.