Maps from here & abroad: a look back at two years of subjective mapping workshops with migrant people

Maps from here & abroad: a look back at two years of subjective mapping workshops with migrant people

In July 2020, CartONG announced the start of a new two-year phase for the Maps from here and abroad project. It is time to have a look back at this innovative project, which led us to conduct 47 workshops with migrant people all over France, thanks to the financial support of the Mental Health Committee for Exiles of the Fondation de France.

A workshop methodology halfway between artistic mediation and subjective mapping

One of CartONG's staff members worked with an art therapist involved in the project to develop a methodology for group art mediation workshops based on subjective mapping. The objective? To be able to propose spaces of expression adapted for migrant people in a state of psychological suffering. The methodology was then adapted according to the intervention contexts, the participants' feedback and the partner organizations.

Each workshop session was facilitated by a team composed of a CartONG staff member specialized in subjective mapping and a mental health professional: either an art therapist involved in the project or a mental health nurse. Throughout the workshops, the neutrality of the facilitators was a particularly important point: it was a question of avoiding any aesthetic judgment on the participants' creations; and of remaining in a position of active listening, available if a participant was encountering any difficulty.

In order to make the workshops accessible to everyone, regardless of their level of French, we created visual instructions to show what subjective mapping is: translating the way we perceive space into a physical creation according to a subjective, affective, imaginary and creative reading and representation. To make sure the scale of the maps and the spaces represented would vary from one participant to another, different themes were proposed: an imaginary country, an extraordinary walk, an astonishing city, etc. These themes were an invitation to represent spaces that had either been experienced by the participants (place of origin, exile route, host territory) or were imaginary (ideal places to live, future trips, imaginary country, etc.).

We suggested a diversity of playful materials encouraging creation in 2D but also in 3D: paper, felt pens, but also beads, fabrics, modeling clay, string, wood, etc. These materials allowed the participants to move away from traditional maps, and encouraged the creation of an ephemeral map. 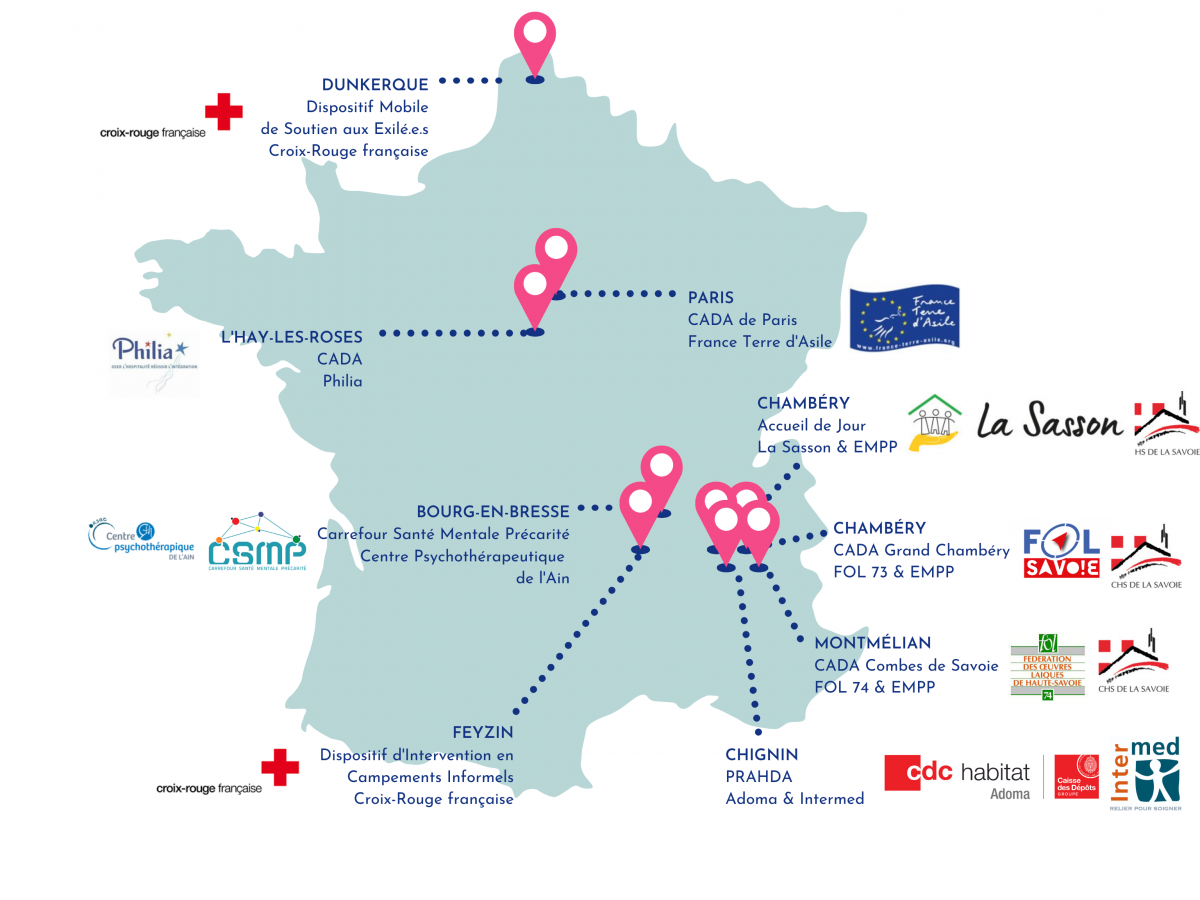 Once the facilitation methodology was ready, CartONG set up partnerships to organize cycles of 3 to 6 workshop sessions in 9 different places, mainly in the Auvergne-Rhône-Alpes region, but also in Île-de-France and in Hauts-de-France. In total, 148 people participated in the workshops. We managed to partner up with a wide range of organizations, resulting in a diversity of publics:

The partners of the project testified to the positive impact of these workshops for their action. Alene Celse Iradukunda, Coordinator of the Rhone Informal Settlements Intervention Program at the French Red Cross, initiated a partnership with CartONG to offer 6 workshops:

"These workshops provide a way to connect with people, but they have also allowed the Red Cross team to make referrals to facilities that offer psychological support."

"I work in mediation and health coordination. Among the people who participated in the workshops, some had never wanted to discuss their health with me despite several requests. By proposing this group activity, I was able to get to know them, gain access to clinical observation and I saw an improvement in their psychological state: more self-confidence, laughter, smiles." 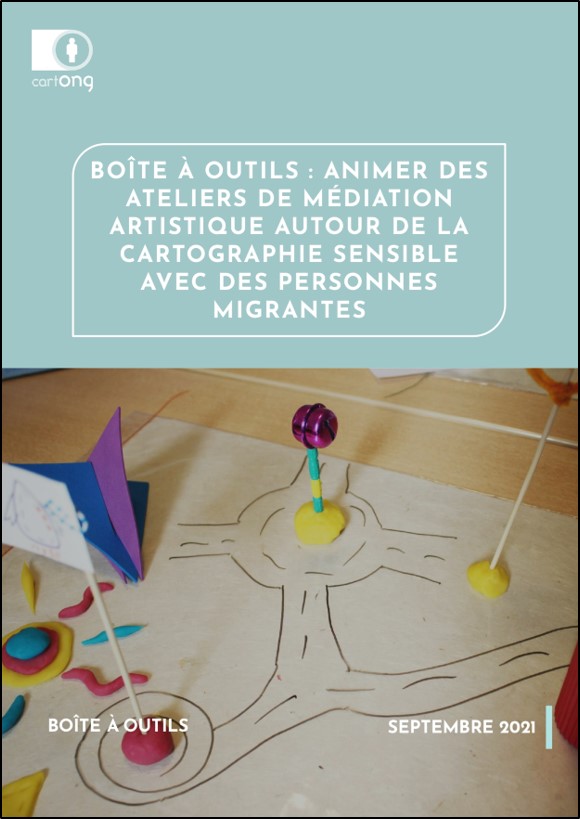 Documenting our approach to facilitate dissemination

In the perspective of disseminating the workshop methodology, we trained about twenty people working for the partner organizations of the project: project managers, social workers, educators, mediator-interpreters.

This close collaboration allowed us to better mobilize the participants, to help them bring up requests for access to individual psychological care, but also to raise awareness about the stakes of artistic mediation.

In order to facilitate the appropriation of the developed workshop methodology by other actors, CartONG also published in September 2021 a toolbox "Facilitating artistic mediation workshops around subjective mapping with migrant people" accessible in French in open source. The methodology of the Maps from here and abroad workshops is described step by step, illustrated by examples drawn from our workshop facilitation experiences. 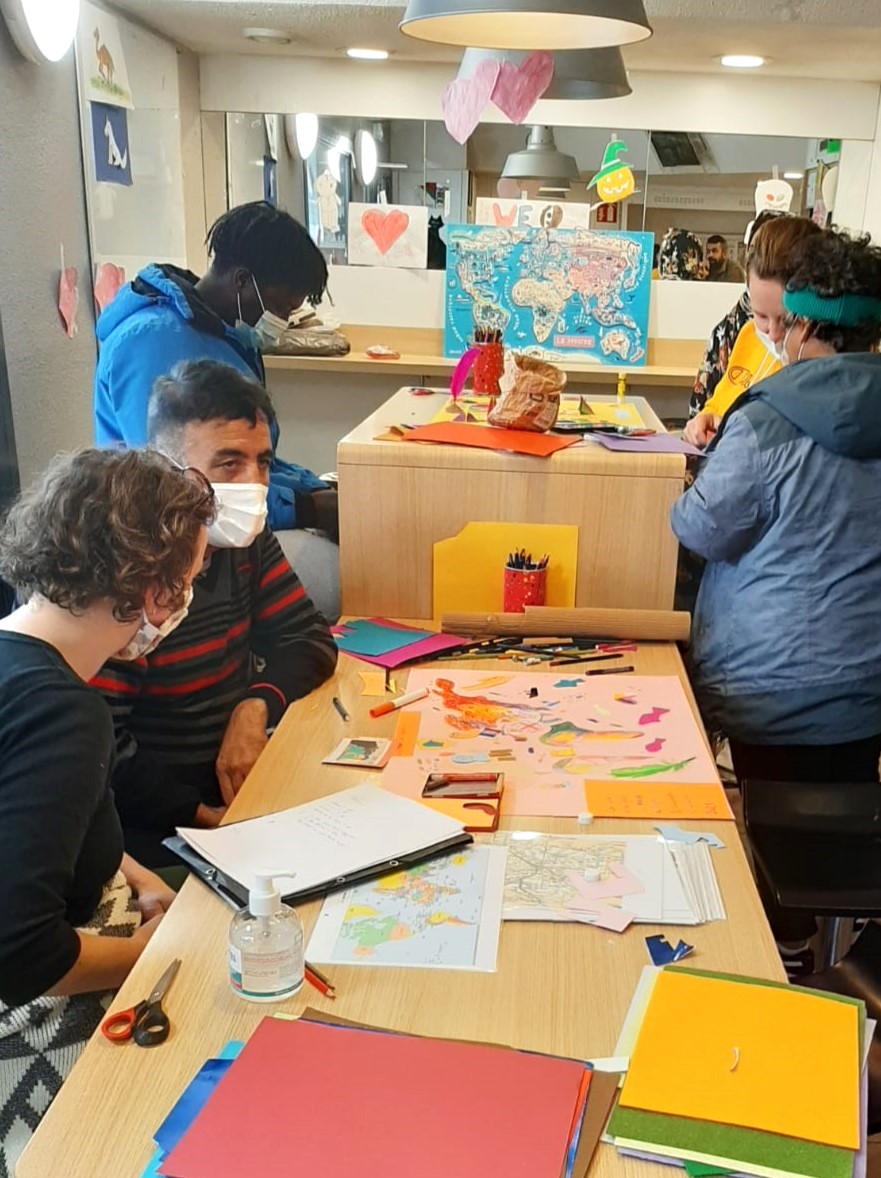 The creation of maps allows exiles to explore in an artistic way their singular relationship to space. Migrant people are often questioned about their journey of exile, which can be painful for them. As subjective mapping offers a lot of freedom, it allows them to detach themselves from the injunction to give a realistic account of their journey. It is an authorization to reinvent their own history by giving free rein to their creativity and imagination.

The participants' feedback shows the positive impact of these workshops on their overall mental health well-being:

"I liked letting my imagination run wild. I liked the materials, the color sheets, the textures. Everything interested me because it was my first time trying it." - participant in a workshop in Paris

"I liked the proposals. Being in a group gives you ideas. You come, you are with someone who proposes something, it relieves you, it makes you feel good. It's very important to think, to share. Here life is not easy." - participant in a workshop in Feyzin

"The workshops make me feel much better. Getting together with people, the fellowship. It allowed me to chase away some of the nostalgia." - participant in a workshop in Chambéry

In the future, CartONG wishes to keep developing subjective mapping projects in collaboration with social action organizations in France and abroad. If the Maps from here and abroad project demonstrated the relevance of this approach ifor supporting migrant publics, it could also be adapted to other audiences (people living in precarious situations, allophones, etc.) or using another angle (gender equality in an urban area, etc.).

For more information, contact us at: info [at] cartong [dot] org.