UNHCR, the UN Refugee Agency, is a global organization dedicated to saving lives, protecting rights and building a better future for refugees, forcibly displaced communities and stateless people. Since 1950, they work to ensure that everybody has the right to seek asylum and find safe refuge, having fled violence, persecution, war or disaster at home. UNHCR takes the lead in protecting people forced to flee wars and persecution around the world, providing life-saving aid including shelter, food and water to ensure their basic safety, rights and dignity.

Webmap of CartONG missions for UNHCR

Open the "Where we work" page in full

CartONG is implementing a Map Portal for UNHCR. This portal is a repository of all pdf maps produced by UNHCR and in the future partners as well. Other mapping products such as webmaps are also available through the map portal and users can request new mapping products through the portal as well.

In 2018, CartONG continued to maintain the tool. 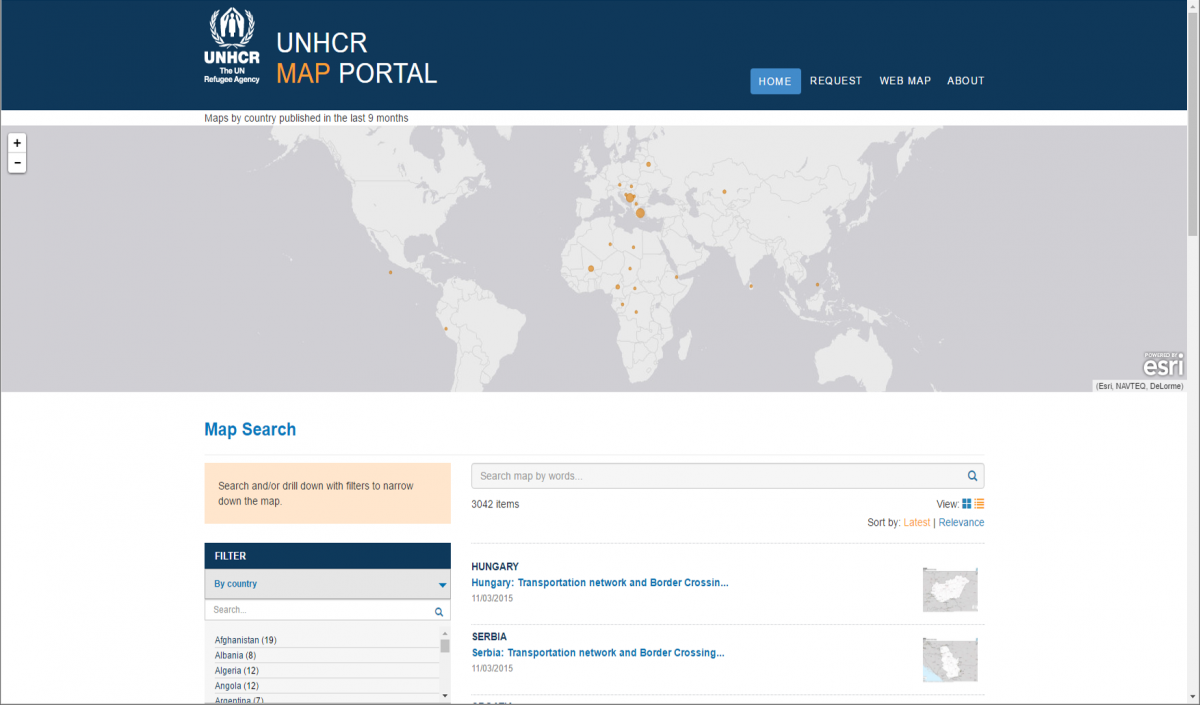 iRHIS (integrated Refugee Health Information System) is an open source tablet and web platform that was developed by GNUCOOP to allow health workers to electronically register and track the health status of refugees in camps, as well as guide UNHCR public health and implementing partners to rapidly detect public health problems and epidemics.

In 2018, CartONG developed two comprehensive training guides tailored to the different diverse health staff profiles comprising of data collectors and supervisors. Three in-country training were conducted on the use of the iRHIS platform for patients individual consultation data collection, online data synchronization to generate reports and the use of the automatic analysis dashboards.

In 2019, CartONG provided one in-country rollout training and a follow-up advanced training on the use of the iRHIS platform in the Democratic Republic of Congo and Congo Brazzaville respectively. In November and early December, our staff traveled to six different locations and trained 62 health staff in how to use the system and to record the information. Additionally, our staff also conducted a follow-up on last year’s mission there, helped to update devices, offered tips and tricks and explained all the new functions. Learn more here or by reading our 2019 Annual Report.

Since March 2018, CartONG has been providing support to the Division of Resilience and Solutions (DRS) of UNHCR, in particular for its Livelihoods and Energy programs.

In 2018, DRS undertook a comprehensive revision of the framework for monitoring the UNHCR Energy and Livelihoods programs on a global level. DRS developed mobile data collection tools which are scalable and a monitoring system that helps implement both Livelihoods and Energy activities across operations. The monitoring system is a system that allows data flow integration linking the data collected by UNHCR operations on KoboToolbox to a centralized online interactive spreadsheet for analysis and data validation before finally publishing to the program’s Livelihoods and Energy Open data platforms.

In 2018, CartONG provided timely technical guidance and support to the UNHCR DRS field operations through the following activities:

You may learn more about checking our 2018 Annual Report.

In 2019, CartONG continued to provide technical guidance and support to the UNHCR DRS field operations through the continuation of 2018 activities and the development of new ones:

The eSite is designed to serve as a web portal where GIS data can be accessed, explored and analyzed for different site planning purposes. The resulting map products are easily deployable and shareable through the platform.

In 2019, the eSite project has advanced considerably, both in terms of defining the needs of its users and in terms of implementation. A first step was to define as closely as possible the needs of the main users of the future eSite platform with appointed focal points for each sector and through the creation of user stories which were translated into functional requirements and grouped into building blocks to be developed with the appropriate technical solutions. The first eSite beta version was implemented on 100% ESRI technologies. This prototype was demoed at several occasions in UNHCR to raise awareness and gauge user acceptance. Further studies and analyses were carried out to compare the advantages, disadvantages and challenges of different technologies that could be used to create a platform like envisaged for eSite. In addition to ESRI tools, selected proprietary and open-source technologies have been included in the benchmarking process. The technical tests and selection of tools for the next eSite development phase will take place during the first semester of 2020.

CartONG provides GIS and mapping support to the CCCM (Camp Coordination, Camp Management) unit within the GDS section at UNHCR.

Following the work of previous years for the CCCM Cluster, in 2018, the ISMI (IDP Situation Monitoring Initiative) tracking dashboard was further enhanced and a new OPSMAP was developed in support of the ISIMM (IDP Sites Integrated Monitoring Matrix) project, both for North-West Syria context. ISMI dashboard has been remarkably improved after the first version delivered in 2017. This tool visualizes the Internally Displaced People (IDP) movement data collected by the cluster, who is responsible for updating the data through CKAN platform. It now includes animated movement layer, filter options through dynamic charts and data exports. ISIMM OPSMAP was deployed in 2018. Similarly to ISMI, and as a new feature in relation to older OPSMAPs, this version is connected to a CKAN platform, which allows the data owners to update it easily without requesting web developers.

The main update on the CCCM Cluster in 2019 was the development of a new OPSMAP, the Site Profile for Southern East Europe (SPSEE), including new features with respect to previous OPSMAPs. SPSEE’s development is close to its finalization. This is the first OPSMAP with a dedicated user/password set up, granting user based access to the application. Another important new feature consists of the possibility to query not only the last Site Profile, but also previous ones. Last but not least, a matrix representation was added as a new visualization option.

CartONG has been supporting the Public Health section of UNHCR since 2015 for the large-scale deployment of an annually-run Knowledge, Attitudes, Practices survey in 180 refugee camps - helping to define the strategy, with the development of substantial training kits, the encoding of the survey and related analysis tools. Our support also involves field training and implementation missions. Here is a short overview of the key achievements since 2015:

Learn more about the support we provided to UNHCR PHS section, in particular for WASH-related activities, by reading our Annual Reports.

CartONG implements site mapping together with UNHCR GDS (Global Data Service, previously known as FICSS) unit by deploying a user-friendly smartphone application for data collection and maintenance and store all collected information online in versatile web maps accessible to all actors in need of it. Already covered camps are accessible in the webmap section of the map portal (maps.unhcr.org).

CartONG supports the Public Health Section (PHS) of UNHCR on a number of MDC projects. Some of our main support is focused on the deployment of the SENS nutrition and WASK KAP surveys for UNHCR PHS, as well as our support on the iRHIS platform (integrated Refugee Health Information System).

Additionally, we also provide support on the implementation of other data collection tools, such as the Health Access and Utilization Survey, a HIV surveillance module, the FACT, the Balanced Score Card for Health Facilities (check out the dashboard here) or the Medical Referral Database Online project. The latter started to take shape in October 2019. The application represents the online version of the currently used MRD Access Database. In 2019, the project implementation was divided into 16 milestones and related sprints. Sprint length was set to 2 weeks to properly organize and manage the work, set achievable goals, allow for continuous release of small sections of the software and gather continuous feedback. In 2019, the first 5 milestones were completed, and the sixth and last one started in the second half of December and was completed during the first week of January 2020.

To learn more about these tools and the work conducted by CartONG, see our Annual Reports.

CartONG also provides support by issuing benchmarkings (benchmarking of 17 MDC solutions applied to the humanitarian sector, etc.) and other assessments. You can find our more about such resources on the CartoBlog.

From 2002 to 2011, Ivory Cost had faced a political crisis. This crisis has led to massive population displacement inside the country and outside the country. Since the end of the crisis in 2011, refugees and IDP’s are returning in large numbers.

In October 2011, United Nations Secretary-General has selected Ivory Cost as one of the three pilot-countries to test the Solutions Strategy. This project aim is to support voluntary repatriation, sustainable reintegration and assistance to host communities and provide a stable and economical life to these populations. The Coordinateur Résident, in collaboration with Ivory Cost Government, PNUD and UNHCR are in charge to develop the strategy.

In order reach a better understanding of the different populations and their needs, all actors involved in the Solution Strategy have decided to conduct a profiling of those returnees populations in West and South-West parts of Ivory Cost and Abidjan.

Data collection should be conducted in 3 districts, 13 departments and Abidjan through 80 enumerators within 16 teams managed by 7 supervisors and 3 survey managers. Focus Group Discussion will be conducted by 12 facilitators after the quantitative data collection has been completed.

For this project, CartONG supports technically JIPS, UNHCR and INS, (Institut National de la Statistique); the three instances leading the profiling exercise. CartONG coded the questionnaire to be ODK compliant and also trained the staff on data collection as well as Server management for the survey managers.

The UNHCR Android project provides technical assistance to set up an Android smart phone based survey within a country operation. Topics have been including village profiles, nutrition and other public health related surveys as well as a rapid registration to verify a census of People of Concerns. A new project in 2013 with JIPS (Joint IDP Profiling Service)  is looking into Urban Profiling.

The UNHCR Android project is one of CartONG’s key projects. It started in 2010 with two pilots and two different technologies, of which one (ODK- OpenDataKit) was retained for surveys in 2011. Field projects were directly supported in country in 2012 in Rwanda, Kenya (Dadaab, next to the Somali border), Sudan, Lebanon and Djibouti. Remote support was also provided to operations in Liberia and Kenya (Kakuma).

Android phones – which like other smartphones have a GPS, camera, sound and a touch pad, basically function like a mini-computer – are extremely useful tools to collect information and help gain time and money during humanitarian crisis. The 2012 surveys covered topics such as nutrition surveys, shelter assessments and evaluation of workshop events. Shelter assessments were implemented in Lebanon with Shelter Actors during the emergency information management mission. More training with shelter actors was conducted on global level, but did not result in a deployment.

Additionally, the annual UNHCR NGO Consultation event in July was supported by CartONG; and a quick survey with visitors for evaluation purposes was conducted. It was also to demonstrate how fast results can be obtained and processed: from finishing the data collection, the team had 45 min to conduct a fast analysis and show the results to the visitors of the events on a screen.

Improving the mobile data collection tools used in the SENS surveys to better flag malnourished and anemic children in refugee settlements
Dec 17, 2020
Using maps to tell the story of the old-established refugee camps: a striking example in Ethiopia
Dec 12, 2019

Displaying WASH infrastructure and household survey results on the same map to better understand the situation in refugee camps and settlements
Oct 04, 2018